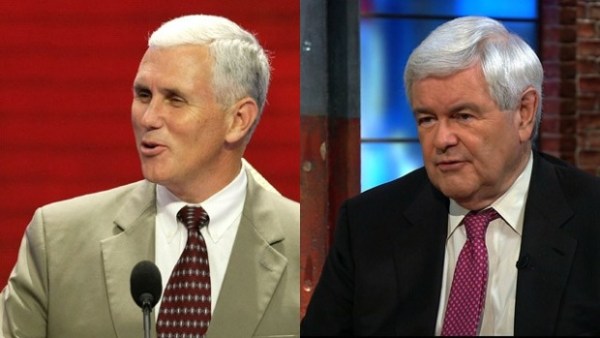 Aside from the mind-boggling array of second rate politicians, B-list celebrities, washed up sports “stars” and other non-leaders, a very curious schedule appears for Wednesday night:

So Newt Gingrich, “a former House speaker” is going on before Ted Cruz and a few others…before “the nominee for vice president” ends the evening.

But we’ve been told that essentially the “who’s more willing to sell their soul” search was down to Gingrich and Mike Pence. So if Gingrich is speaking earlier in the evening BEFORE the nominee for vice president…wouldn’t that mean that Pence would be the guy?

If nothing else it almost certainly eliminates Gingrich as an option.

Looks like Pence is the guy and Trump caved in to his children’s recommendation over his own gut instinct.

UPDATE: Politico just released the “official” speaking list. Flynn, Christie and Gingrich are all listed. Pence is not. This adds further fuel to the speculation that Pence is a “surprise” speaker, which would be the case of he was the VP pick.

UPDATE 3: What a bunch of losers. Aside from Scott Walker, Ted Cruz and mayyyyybe Tom Cotton or Jodi Ernst, which of these speakers would be appealing to a real conservative? Jeff Sessions? Paul Ryan (no doubt with a gun to his head)? Important corollary to that – remove anyone who hasn’t been relevant for the past 10 years. This is the most radioactive nominee we have ever had. And anyone who voted for Trump in primaries should be ashamed of themselves.