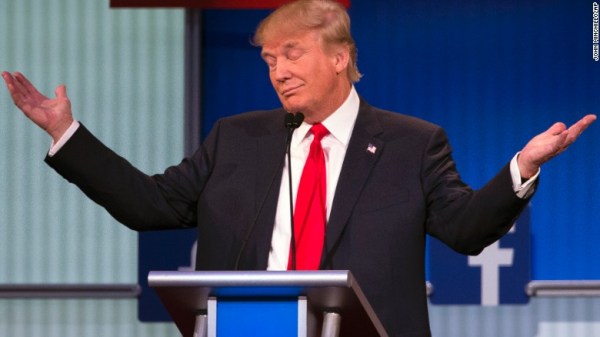 So Trump has been a “general election” candidate now for what…five minutes? An hour?

Remember how he ran his entire campaign based on how he isn’t “owned” by the special interests?

The candidate “took steps to appropriate much of the Republican National Committee’s financial and political infrastructure for his presidential campaign,” the New York Times reports. Having spent around $40 million on the primaries, Trump, who claims to be worth as much as $10 billion, insists that “he may need as much as $1.5 billion for the fall campaign, but that he will seek to raise it from donors.”

What a difference a few months makes, huh?

Still think he’s better than Hillary Clinton? He’s to the LEFT of her on almost every major issue we’re supposed to care about as Republicans (national security, taxes, national debt, foreign policy), he sounds like a blithering idiot racist when he speaks and the social issues Republicans supposedly care about only started mattering to him…………a year ago.

What makes you think that he won’t be going back on all of the rest of his promises the DAY AFTER HE ENTERS THE WHITE HOUSE?

Listen, we get it. Hillary Clinton is…not great. She’s not our first choice. She’s not our 1,000th choice. But it’s time to wake up and recognize the fact that we are Americans before we are Republicans and out of the two choices we’ve been presented with, she is more in line with Republican ideology than he is!

There is still time to avert a national catastrophe.

Get involved. Sign the pledge. Share this information. If we can each just influence a few people in key battleground states we can stop this from happening and keep this lying blowhard idiot from destroying the country.

Then, we can get started on electing an ACTUAL Republican in 2020.