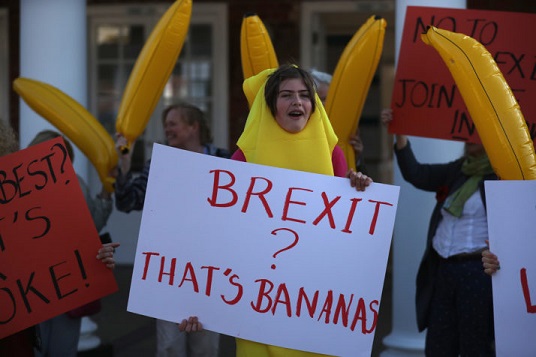 Is this real life?

On the day the most important ally the United States has…on EARTH…the presumptive Republican nominee and definitive buffoon, delivered his most bananas speech yet.

Just arrived in Scotland. Place is going wild over the vote. They took their country back, just like we will take America back. No games!

Let’s forget for a minute about Trump’s absolutely idiotic, tone-deaf tweet that probably offended roughly 70% of Scots. Actually no, let’s NOT forget about that. If elected, does anyone really think misguided, poorly worded, shoot-from-the-hip tweets like this WON’T be the norm? If so you are far more optimistic than we are.

It’s one thing to be “not politically correct” or to “tell it like it is” or whatever cliche, moronic slogan Trump supporters latch onto when he pulls these kind of stunts. It is something far different for the leader of the free world to piss people off in every single country he debases with his odious presence.

In any case, this was not even the worst thing Trump did today!

As worldwide stock markets plunged and middle class Americans watched billions of their life savings vanish within the span of minutes, the man a small plurality of our fellow Republicans have allowed to hijack our party, gave a long awaited foreign policy speech from his new golf course in Scotland.

Would he reassure his future subjects back home that everything would be fine? Would he return home early in order to demonstrate leadership and solidarity with his fellow Americans? Would he unveil some new policies designed to mitigate the fallout from an impending two year divorce between Britain and Europe? Would he comment on the possibility of a domino effect of other major Western European powers bailing on their weaker eastern neighbors? Would he communicate to foreign powers that he had a plan on how to work with them to ensure stability in Europe? Address the impending power vacuum in Britain after David Cameron resigns?

Or would he spend 17 minutes of international coverage, with literally the future of Europe hanging in the balance, to talk about what a great job he did on renovating a golf course?

Skip to about 1:38 (after the customary idiot protestor gets tossed) for the most bananarama foreign policy speech you will ever hear. Not only does he start by saying it’s an historic day “not just because of Turnberry,” he then takes full advantage of his international coverage to tout what a beautiful golf course he has built. Just try and get to the supposedly substantive portion of the speech…after he thanks his family and everyone who helped him build wonderful suites so that golfers can sit and eat in between rounds of golf.

All of this while Europe is literally coming apart at the seems.

Is it any surprise that the Dow Jones dropped an ADDITIONAL 200 points not long after he finished? It had actually been rebounding a bit (down 340 rather than the initial 500 drop when the markets opened) before this idiot started talking. Now it’s down 570 points, with no end in sight.

During the early hours of the biggest crisis the United States and Europe have faced since Greece disaster, the man that about 38% of Americans feel should be their next leader, spent the entirety of his speech talking about golf history, lighthouses, hotel occupancy, drains, pipes and the tremendous performance (primarily because of its tremendous location apparently) of the Turnberry golf course. Then he brought up his children to talk about how great Trump is and crack jokes about how they hope they “made Turnberry great again.”

In fact, there was no real discussion of the actual current events until A REPORTER ASKS HIM ABOUT IT 17 MINUTES INTO THIS TRAIN WRECK.

Then, minutes later, he talked about how he WOULD PERSONALLY BENEFIT FROM A WEAKER POUND SINCE MORE PEOPLE WOULD COME TO HIS STUPID GOLF COURSE.

This is leadership? This is INSANITY.

Can you imagine four (or dear Lord save us, eight) years of this?

How is this real?

UPDATE: Now we’re down 610 points. Enjoy the golf course, Trump family! You just let us know when you feel like getting back to trying to lead the free world!