Posted on November 7, 2016 in Donald Trump, Hillary Clinton, Worst. Election. Ever. by GOPWithHer.

Ok folks, here goes. Our thoughts have always been that if Hillary wins, it is more likely to come as a (relative) landslide than a narrow win. A close election favors Donald Trump and the prospect for that is too horrifying to let play out. Besides, there’s plenty of sites that will tell you what a close race looks like.

Here’s our best estimate (hope?) for how election night shapes up: 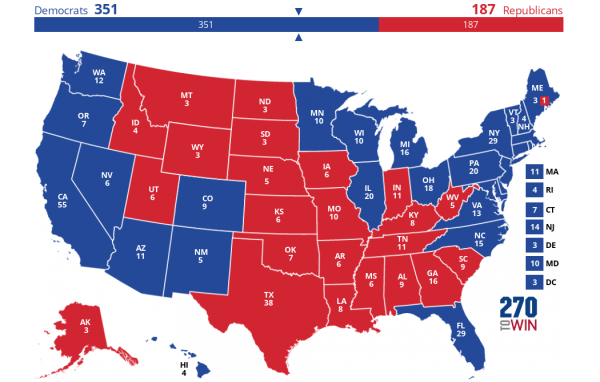 Click the map to create your own at 270toWin.com

I’m reasonably confident in this map based on three factors:

1. Latino surge gives Hillary a major boost in Florida and Arizona (which is a reach, but Latinos in Arizona are absolutely blowing away their 2012 levels).
2. Republican women in Ohio and Michigan fight off Trump’s incursions with their husbands.
3. Unbelievable Clinton ground game advantage (basically well oiled machine VS nothing) pushes her over the finish line in North Carolina, New Hampshire and Pennsylvania.

I think Ohio, Michigan and Pennsylvania will be the closest they’ve been in decades, but ultimately no cigar.

My guess is Florida will also be close, but not like in the past. Just way too many bad hombres and nasty Republican women that Trump has insulted and demeaned for 15 months that his Cuban support is the weakest its been for a Republican candidate in several cycles and female Republicans offset the angry white men he gets to come out of the woodwork. Also keep an eye on the “no political alliance” voters in Florida which skew more minority heavy than the rest of the electorate.

In North Carolina, African American early vote has been down, but that was also the case in Florida which ended up seeing significantly more Black voters than 2012. My guess is there is an African American surge in North Carolina, driven partially by Clinton’s ground game and righteous indignation over the voting shenanigans pulled by the state that kept a lot of polls closed during the first few days of early voting. Also, increases in college-educated whites and Asians in the research triangle means white vote in North Carolina looks more like Virginia than South Carolina.

Iowa isn’t really that close in the end.

Trump gets his 1 electoral vote from Maine. Way to go, jerk.

Arizona – I don’t really feel good about this. This is a reach, but made possible by shockingly close polls, plus Latino surge which makes the electorate look different from those polls.

Georgia – really close polling here + Latino surge (albeit much smaller portion of the population than Arizona and Florida) make it interesting. More likely than not to stay red, but humiliatingly close.

Alaska – believe it or not, the most recent telephone poll in Alaska actually had Clinton AHEAD. There’s also some weird issue with Trump’s incompetent campaign somehow screwing up the ballot for him. Also the Inuit population is…not enamored with Trump. High likelihood they would not be showing up in phone polls as well.

Ultimate net margin of victory for the national vote: 5.5% with Trump’s worst nightmare coming true as Latinos get revenge for his idiotic taco bowl photo and 50,000 other indignities suffered during this horrific election cycle.

Despite the map, I expect a lot of close races in swing states. The national margin comes more from running up the score in places like Texas, California, Georgia…places that ultimately won’t make a difference in the Electoral Vote.