Does Donald Trump Want to be King?

One of the first things every elementary schooler learns in an American history course is that America fought the Revolutionary War against the British to gain their freedom and end the rule of monarchs. George Washington, when offered a third presidential term, said no as he didn’t want the American public to view him as a monarch. Now, in 2016, are we seeing a candidate that wants to run our country as his own Fiefdom?

Donald J. Trump has consistently proved that he has no interest in promoting a democratic regime. If he were to be elected he has shown every sign of his intent to turn our great republic into the “Trump Kingdom of America”. While this may sound dramatic, let’s look at the facts.

The lies, flip-flopping, and degradation of millions of Americans, leads to a candidate that is certainly not qualified to be the President of the greatest country in the world. Mr. Trump’s values are certainly far from Republican and would make our party’s flag-bearers; Ronald Reagan, Barry Goldwater, and Abraham Lincoln cringe. The circus campaign of Donald J. Trump must be denounced by Republicans all across America and funding from the RNC needs to be immediately ceased. Only when this occurs will the message be sent that the Republican party and the United States of America does not want a Trump Kingdom of America. 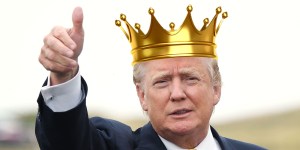